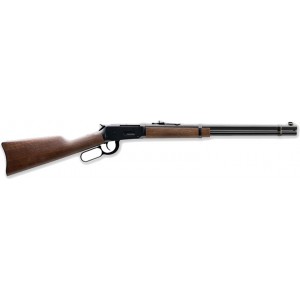 NOTICE: This item is a firearm and must be shipped to an FFL dealer in your state.

Please visit our FFL Information page for details and help with the process.
Description Reviews (0)

The Winchester® Model 94® is the world's most popular lever-action and today's rifles utilize the latest manufacturing technology to bring you the most accurate models ever produced. The new Model 94 Carbine is perfect for hunting in thick brush for deer, bear, wild hogs and other fast-moving game. Pick your Model 94 and pick out your target.

No greater names have ever been linked together more solidly than Winchester® and the Model 1894. Early on in 1862, Oliver Fisher Winchester began Winchester Repeating Arms Company and followed with a series of fine rilfes like the 1866, 1873 and 1876. Then John M. Browning came along with numerous other designs which became legendary Winchesters, like the Single Shot 1885, Model 86 and the Model 92 among others. Then, in 1893 he presented to Winchester a model that was a perfect match for the new 30-30 smokeless cartridge, ushering in a new era in firearms development.

This rifle became the Model 94 Winchester. It was the ultimate iteration of Winchester levers and, although coming at the end of westward expansion, is often called "The Gun that Won the West."

Note: HTML is not translated!

Yorkfirearms is a family owned shop located in Limington, ME.  When you call, you speak to an owner.  Let us be your online source for all your firearm needs!

COVID-19 UPDATE:  All business is currently handled by appointment only.  Face masks are required.  Please call in advance.  Do not inquire if you are sick.

We support & participate in local shooting events.
All hours subject to change. Please call ahead.