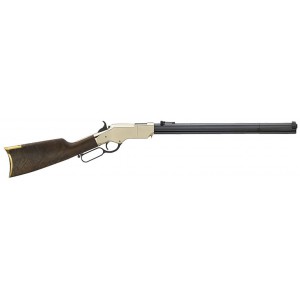 NOTICE: This item is a firearm and must be shipped to an FFL dealer in your state.

Please visit our FFL Information page for details and help with the process.
Description Reviews (0)

In the days when the average soldier was expected to be able to fire up to three rounds per minute through his muzzle-loading Springfield rifle, a small unit armed with Henry rifles could provide the firepower of an entire company. That ground-breaking lever action rifle design was the foundation for a uniquely American class of long guns that's still with us today, over 155 years later.

With great effort, and more than a little pride in a job well done, we've brought back the Original Henry Rifle, made entirely on US soil, just as B. T. Henry's rifles were. True to Henry's 1860 patterns and patents, and virtually identical aside from concessions necessary to adapt to the .44-40 and .45 Colt centerfire rounds that replaced the long-obsolete rimfires, our Original Henry Rifle is built in three versions, the H011 using a specially-formulated hardened brass receiver with the same tensile strength as steel to reproduce the most common 1860-era Henry, the H011IF to bring back the ultra-rare "iron-framed" Henry, and the H011R featuring a shorter 20.5" barrel. All three come fitted with a one-piece octagonal barrel and magazine, fancy grade American Walnut stocks, a classic folding ladder rear sight and blade front, traditional half-cock safety hammer notch, and no modernized manual safeties. The H011 and H011IF share a 24.5" barrel with a 13 round capacity, while the H011R Rare Carbine version uses a 20.5" barrel and 10 round capacity.

Note: HTML is not translated!

Yorkfirearms is a family owned shop located in Limington, ME.  When you call, you speak to an owner.  Let us be your online source for all your firearm needs!

COVID-19 UPDATE:  All business is currently handled by appointment only.  Face masks are required.  Please call in advance.  Do not inquire if you are sick.

We support & participate in local shooting events.
All hours subject to change. Please call ahead.